Saxon and Viking
Aethelflaed and Ingimund

In the early years of the 900sAD, Chester was a frontier town at the end of the kingdom of Mercia. It had been mostly neglected for 500 years after the departure of the Romans, with only a few people living there among the collapsed remains of the Roman buildings and walls.

Lady Aethelflaed was the daughter of Wessex King Alfred the Great, and married to Ethelred, Lord of Mercia. She was responsible for defeating Ingimund, a warrior who led an army of Norwegians and Danes to attack Chester.

Ingimundhad been expelled from Ireland, then Anglesey before settling on the Wirral with the apparent consent of Lady Aethelflaed. Although we might think of Ingimundas a Viking warrior, he was not associated with other Vikings from Norway, Denmark, the Isle of Man or Ireland. He did however, get their support when he turned on Chester. 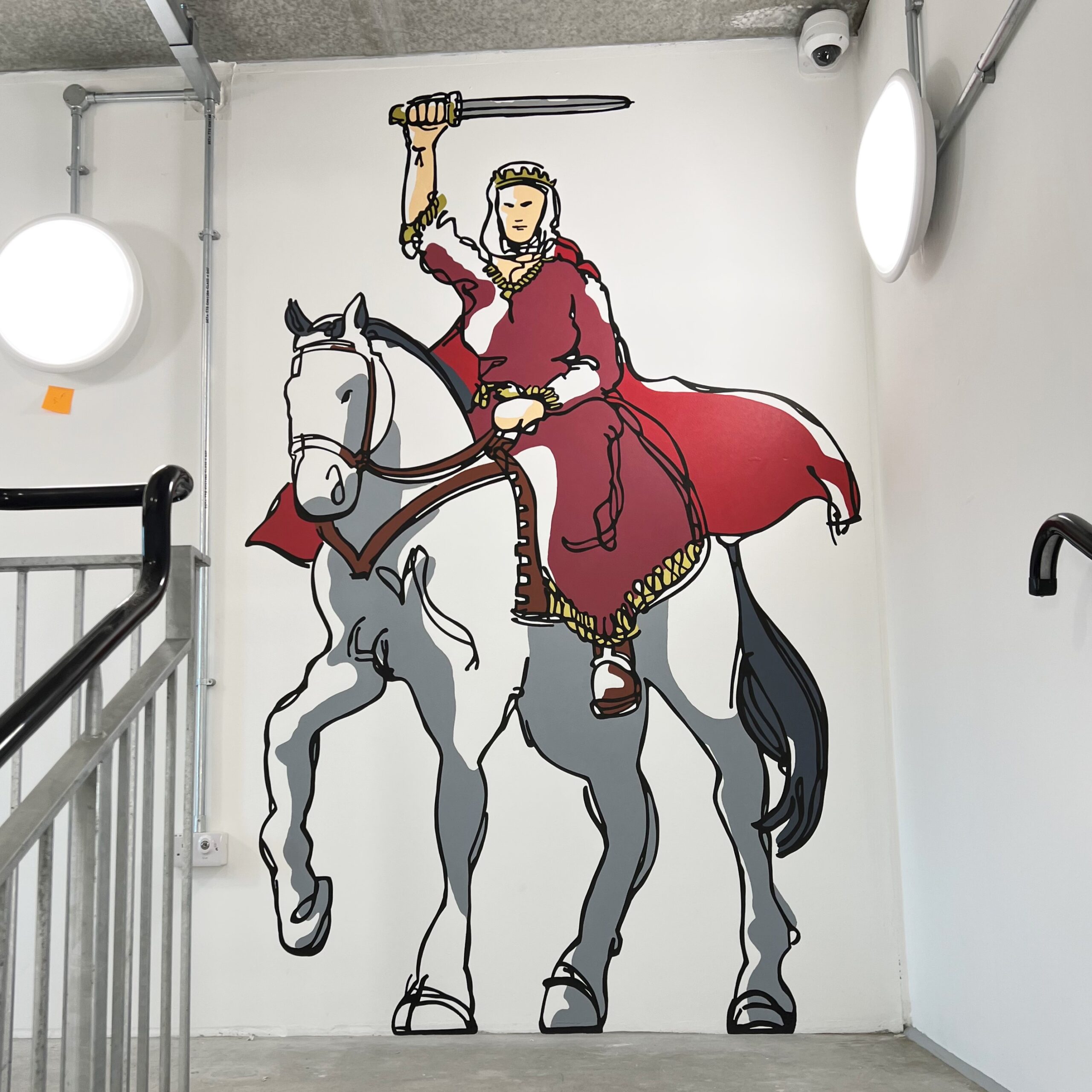 According to Irish records, Aethelflaed laid a trap, leaving the city gates open as her army went to battle, with horsemen hiding inside waiting to attack as soon the Vikings had entered and the gates closed behind them. The trap worked but enough Vikings remained to lay a siege. Aethelflaed negotiated with Irish warriors fighting for Ingimund and they betrayed the attackers who were slaughtered. It has tobe said that it is very unlikely that Aethelflaed herself went into battle despite the descriptions of her as the ‘warrior queen’ but she was very much involved. It is also unlikely that boiling beer and beehives were dropped from the town walls onto the Vikings, though that has become part of history.

In the year after the battle, Chester’s Roman walls were re-fortified, Aethelflaedis associated with the foundation of St. Peter’s Church and with the likely removal of the southern part of the Roman wall and extending the city to the river. Aethelflaed built and fortified towns (Buhrs) along the Welsh border, including Chester, pre-dating Edward I’s ‘ring of steel’ by 400 years. One big difference was that she created a defensive wall where Edward I sought to dominate with defences  designed to protect whole communities unlike the later Norman castles which were built to protect the Lords.

Saxon women were well respected, could own their own property and land, but it was highly unusual that when her husband, Ethelred, died in 911, it was a woman, who became the first Saxon Queen to rule alone. Aethelflaed negotiated treaties, planned towns, collected taxes and applied the law. She led for less than a decade but made lasting changes to the country.

Some sources suggest that it was Aethelflaed, as Queen of Mercia, who chose St. Werburgh for the city of Chester and arranged for her remains to be moved to the city. We do know that she founded a mint to issue coins in Chester, which became one of the most important in the country. In northern Mercia, Chester was second only to Tamworth, centre of Mercian power, where Ethelflaeddied in 918AD.

After Ethelflaeds death, her brother Edmund, then King of Wessex, assumed control of Mercia and visited Chester but was treated by the Chester people as an outsider and killed just south of the city at Farndon.

Where can you find traces of Vikings and Saxons in Chester today?

Ingimund’s Vikings, actually Hiberno-Norse rather than the Danes who occupied much of eastern England, settled in a thriving community on the Wirral as well as in the southern part of Chester. You will find St.  Olav’s church on Lower Bridge Street.

Ethelflaed left a legacy of the walls which extend beyond the original Roman line (which runs underneath this car park). You will find a colourful image of Lady Ethelflaed herself in the great west window of Chester Cathedral. Women of Chester tours operate weekly from the Town Hall tourist office and feature Aethelflaed.

ARMAN, J., 2017. The Warrior Queen: The Life and Legend of Aethelflaed, Daughter of Alfred the Great. Stroud: Amberley Publishing.

CLARKSON, T., 2018. Aethelaed: The Lady of the Mercians. Edinburgh: Birlinn

MORRIS,M.,2021. The Anglo-Saxons: A History of the Beginnings of England. London: Penguin Random House